18-Wheelers May Cause Catastrophic Accidents Due to Bad Tires 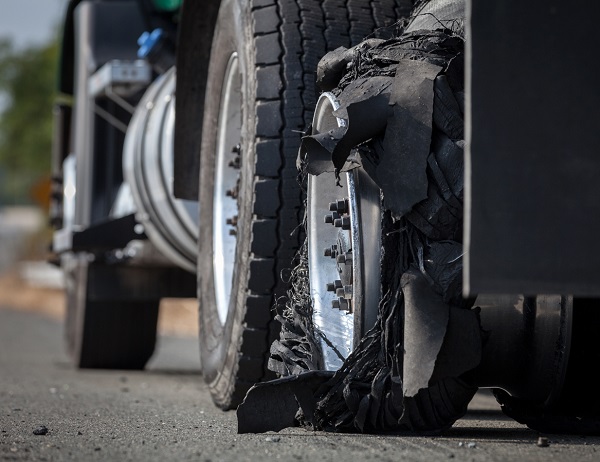 Most of us can’t take a road trip, or even possibly a daily commute, without seeing an 18-wheeler or semi that is pulled over on the side of the highway due to a blown-out tire, or another maintenance issue. And sometimes they are forced to stop in the road, causing further hazard—but accidents happen to the best of us and it may be impossible to know when an errant tire is going to blow.

Routine maintenance should be able to prevent many flat tires and blowouts from occurring due to mileage; unfortunately, there is still a multitude of reasons tires may be punctured or damaged while traveling. New technology is allowing for much stronger materials in tires today, but continued travel over rough pavement, major potholes, and glass and other sharp objects may still be responsible for wreaking havoc not only on a truck, but the highway itself, as well as causing potential harm to motorists passing by.

Heat can be a major issue leading to tire damage also and may affect trucks traveling throughout the warmer regions. Another major element relating to the disintegration and failure of tires can be an overload of cargo. This is another serious problem with trucks overall, as goods being hauled may not be secured properly and could fall out onto passing motorists (or sometimes debris sprays onto the road from landscaping, waste, or concrete trucks, damaging windshields and more). If a truck is overloaded, however, that puts tremendous strain on the mechanics of the vehicle, and the tires too.

Most of us have had to switch lanes quickly at one time or another due to tire debris in the road from a truck having problems. Moving out of the way is certainly desirable—rather than running over a gigantic hunk of rubber or other bulky materials while you are going 55 miles an hour or more—but swerving into another lane at a second’s notice can be extremely dangerous. And while you may have no choice, such action could lead to a catastrophic car accident, or a multi-car accident even, resulting in tragic fatalities, paralysis, broken arms and legs, soft tissue damage, and major head injuries that could have long-lasting effects—even including permanent cognitive damage.

Because the dangers on the highways can at times be extremely unpredictable, it is key to never take your eyes off the road. Distracted driving is at an all-time high, and truck drivers may be just as guilty, causing further peril to motorists. If you have been injured in a car or truck accident due to the negligence of others, this is not the time to go it alone!